Today is September 11, the 4th anniversary of terrorist attacks in the USA. On September 11, 2001, terrorists attacked and killed three thousand innocent people. Everyone is remembering and mourning the prescious lives of the lost and loved ones. It's a traumatizing incident that caused havoc and immense loss. What's the USA is doing? Their force and the intelligence are going from the North to South, East to West to find these culprits. If I ask you, are they going to rehabilitate these terrorists? You'll respond, "are you crazy"?

But in the same token if you look at three million innocent Bangladeshi who lost their lives by the Pakistani army and its collaborator Jamatis in 1971, it turns quite different and opposite. Now the same terrorist Jamati group has allied with the party in power in Bangladesh. If the Americans can not forgive the few terrorists that killed three thousands, how can we forgive and forget the fundamentalist and terrorist Jamati group that killed three million innocent people in nine months?

Is justice going to be redefined now? Is the law of land going to be blind? How can the humanity be indifferent and neglectful? While I express my full sympathy with the Americans for the enormous loss of three thousands in the USA, I would also challenge you to go through the horror of loss of three millions in Bangladesh. Life is life across the border... Click the picture below to read the whole book: 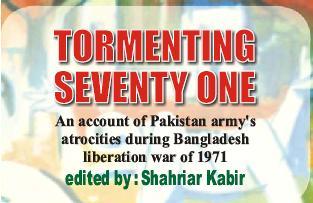