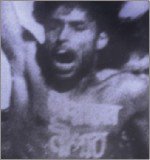 Noor Hossain in Bangladesh died today in 1987. His sacrifice was a milestone in the democratic movement of Bangladesh. Adda could not find much coverage about Noor’s sacrifice in our dailies on the 18th anniversary. Thank you New Age for interviewing Noor Hossain’s mother. Correspondent Arif Newaz Farazi writes at the New Age on November 10, 2005, Noor’s mother proud of son:

“Mariam Begum could not hold her tears speaking about her son. ‘It is hard for any mother to lose her son. But I have no sorrows,’ she said. ‘I am proud of Noor.’ Noor Hossain was shot dead by the Law enforcers near Zero Point in Dhaka, when he joined a procession, which was part of a movement calling for an end to the military dictatorship of HM Ershad.

The 25-year-old became an icon of democratic movement. With ‘down with autocracy’ painted in white on the back and ‘free democracy’ on the chest, Noor took to the streets 18 years ago on this day. A picture of Noor from behind, hands flung out in protest and the inscription ‘down with autocracy’ shining boldly, has become one of the symbols embodying the spirit of democratic movement of the late 1980s. Mariam said she was grateful to the subsequent governments for providing for her family and naming Zero Point as Noor Hossain Square.... Noor Hossain’s killing was among the many factors that sparked off widespread violent protests against HM Ershad’s military regime and its subsequent fall on December 6, 1990, paving the way for restoration of democracy”.

"...A horrid monster comes, casting dark shadows
all around;
in a moment he crushes under his heels
the foundation of new civilization,
he hangs the full moon on the scaffold,
declares unlawful the blossoming
of the lotus and the rose.
He bans my poems, stanza by stanza,
quietly, without any fanfare,
he bans your breath,
he bans the fragrance of your hair.

By the bent body of the young girl
sitting on the lonely porch of old age.
waiting for the dawn of happy days.
By the long days and nights of Nelson Mandella
spent behind the bars.

By the martyrdom of the heroic youth
Noor Hossain,
O Freedom, raise your head like Titan,
give a sky shattering shout,
tear off the chain around
your wrists.
Roar, Freedom, roar mightily"!