When people are rising: 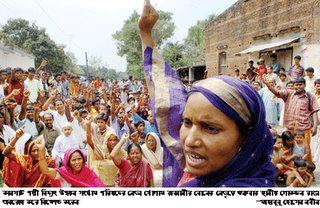 Adda is back. I’ll try to update my English Adda as I’m really occupied with my Bangla Adda. It is a sad news again in Bangladesh. People in a small district of Northern Bangladesh are fighting for an uninterrupted electricity supply, so that they can continue their irrigation project.

Government has grossly failed to provide electricity supply or pacify the people peacefully. It is sad as more peopled died there. New Age reports on April 7th, “At least three persons were killed and more than 50 wounded in a fierce clash between members of Kansat Palli Bidyut Sangram Parishad (action council for rural electrification) and local activists of the ruling BNP at Shibganj in Chapainawabganj, 251 kilometres northwest of the capital Dhaka, on Thursday evening. The death count may increase as many of the wounded, whose condition was stated to be critical, were without treatment. The action council had earlier announced a procession of its activists carrying brooms and sticks on Thursday and demanding uninterrupted supply of electricity.”

Read more information also from Daily Star. May be someone needs to look back that this same area experienced mass peasant’s movement almost 60 years ago. History still highlights about Nachole Krishak Andolan (peasants' movement) organised by ila mitra in 1949. Is it another phase of peasants’ movement?

Comments:
It is time that more Golam Rabbanis come up to provide a platform for these suffering poor people to stand up against these corrupt local officials.